Funded through the Air Force Research Laboratory (AFRL) on Wright Patterson Air Force Base (WPAFB) in Dayton, OH, $10,000 was given to several teams across the US to compete in creating an afterburner for a JetCat P-80SE Turbojet engine. I was elected team lead for Miami University, and we eventually created what would be the most ambitious design AFRL has seen in its history of this competition.

An afterburner is a secondary burn used on fighter aircraft to increase thrust to get to cruising speeds, escape danger, or break the sound barrier. Several aircraft can reach Mach 1 (speed of sound) without the need for an afterburner, but most aircraft do. Afterburners are highly inefficient in terms of fuel consumption for addition velocity, but this is a calculated risk necessary to the mission of these aircraft.

Afterburners first take in the exhaust of the jet engine before it. Kerosene is then injected into the chamber and begins to mix with the hot gases of the engine exhaust. Depending on the type of fuel and aircraft, this gas could auto ignite, but in this case, a glow plug was used as an ignition source, though most full scale engines would use several spark plugs to achieve this. So, once the air-fuel mixture is ignited, it burns from something called a flame holder. This device creates a low velocity pocket for the flame to originate from. A popular analogy for an afterburner is like lighting a match in a hurricane. Thus, the flame older creates a relatively low velocity ring for the air-fuel mixture to burn.

After the fuel is ignited, it passes through the combustion chamber and out into the variable nozzle. As the gases expand near the exit, thrust is created and the plane is propelled forward. The variable nozzle is able to create different exit areas that are needed at different stages of the burn. If the engine is choked to much, the flame will burn out, and if the exit is too wide open, you aren't getting as much thrust as possible.

The initial phase of the project was researching how an afterburner functions, and getting a crash course in compressible flow. Gases behave much differently near Mach 1+ speeds, so that was something that needed to be learned before continuing. Once we had an idea of the components that went into an afterburner, we started looking into designs. We wanted to go above and beyond the requirements of the program, so we decided to experiment with direct metal laser sintering (DMLS i.e. 3D printing metal), also incorporating a variable flow nozzle inspired by the F-22 Raptor's thrust vectoring system, and performing an experiment of which I will explain later.

Once we had a thorough design plan, the team entered into a design review with the senior staff of the Mechanical and Manufacturing Engineering (MME) department. We receive one of the highest scores for our plan, and were given the go-ahead to begin fabrication.

As for the experiment I mentioned earlier, we wanted to test the impact of internal fins on the residence time of the flow. Residence time is the time that a particular molecule of gas stays in the afterburner. Unfortunately for most afterburners, due to their size and speed of the gases, a lot of fuel ends up not burning until after it has left the aircraft, meaning there is a loss in potential thrust, thus we sought to increase the amount of fuel burned inside the afterburner. In the diagram above, fins are visible in the combustion chamber. We hypothesized that if the tube length could be artificially increased with fins by creating a swirl, more fuel would combust inside the engine, possibly leading to an increase in thrust. Computational fluid analysis (CFD) was used to determine the optimal fin pattern, and a second combustion chamber made of smooth walls was also created as a control for this experiment.

Because of the complex geometry required to create the sweeping fins inside the combustion chamber, we decided to manufacture a majority of the afterburner using 3D printed cobalt-chromium. This is an ultra-high temperature material capable of withstanding the forces and temperatures inside the afterburner. We used this process for the combustion chamber, flame holder, and variable nozzle assembly.

The last thing the afterburner needed was a controls system to remotely operate and monitor it during operation. I used off the shelf Allen Bradley PLC components to make a function controller, while also building upon my ladder logic programming from my controls course. This system controlled and monitored the following:

After much trial and error we were finally able to get the afterburner to function reliably. The team then went on to win Best in Show for the entire MME department's senior design expo. The video below shows the last run of the afterburner before it was presented to AFRL's small engine propulsion division after graduation.

Post graduation, the team drove up to WPAFB for an in-person test and presentaiton with AFRL's team of engineers and military leadership. We unfortunately had a short in the electrical system on test day, being unable to perform a true comparison of the system with and without the combustion fins. Even still, we learned a lot through the experience.

AFRL uses this competition not only as a means for getting STEM students excited and involved in real-world projects, but also as a way of seeding new ideas for future aircraft designs. It is possible in the future that 3D printed metals become commonplace for military aircraft, but only time will tell. 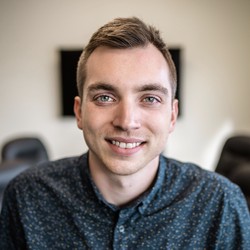